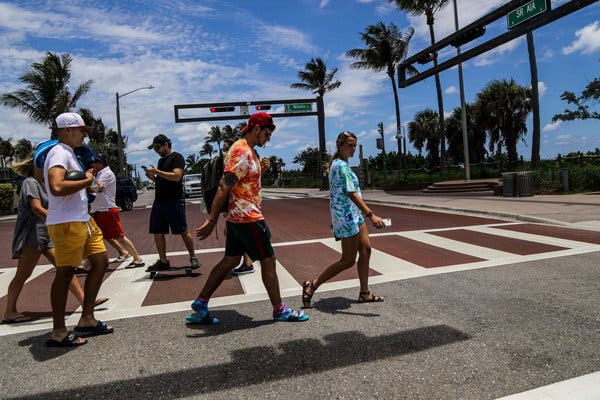 For the third straight day, Florida and South Carolina broke their single-day records for new cases, while infection levels for Missouri and Nevada also reached new highs on Saturday.
And on Friday, the United States reported more than 30,000 new infections, its highest total since May 1, with cases rising in 19 states across the South, West and Midwest.
Florida reported 4,049 new cases on Saturday, breaking Friday’s record (3,822) and Thursday’s record (3,207). The state now has had 93,797 cases and 3,144 deaths.
South Carolina broke its record with 1,155 new cases; Nevada had 452 and Missouri had 375.
The new infections have skewed younger, with more people in their 20s and 30s testing positive, Gov. Ron DeSantis of Florida said.
On Saturday, the Florida Department of Health issued an additional health advisory, recommending that people avoid crowds greater than 50 people, and encouraging social distancing and mask wearing for gatherings with fewer than 50.
President Trump is set to deliver his national convention speech on Aug. 27 in Jacksonville, Fla., inside an arena that holds 15,000 people.
Florida “has all the makings of the next large epicenter,” according to model projections by the PolicyLab at Children’s Hospital of Philadelphia.
Southern officials in particular are speaking out with increasing alarm about the large number of cases turning up in young adults.
At least 100 cases were linked on Friday to employees and customers of bars in the Tigerland nightlife district near the Louisiana State University campus. In South Carolina, cases among people who are 21 to 30 have grown 413 percent since April 4. And in Mississippi, state officials said several cases had been tied to fraternity rush parties in Oxford, home to the University of Mississippi. More than 80 percent of new cases in Oxford involved people 18 to 24.

We Need to Stop Measuring Black Lives by Their Whiteness

Where Did BIPOC Come From?

“Early information suggests that they’re violating the law in the number of people who are at these parties,” said Dr. Thomas Dobbs, Mississippi’s state health officer, who noted that indoor gatherings without social distancing were supposed to be limited to 20 people.
In South Carolina, officials warned that some young people had become seriously ill from the virus and that those without serious symptoms could still infect family members and friends.
“The increases that we’re seeing serve as a warning that young adults and youth are not immune to Covid-19,” said Dr. Brannon Traxler of the South Carolina Department of Health and Environmental Control. “They also tell us that younger South Carolinians are not taking social distancing seriously.”
The clusters may be especially worrying to colleges and universities that plan to bring students back to campus in the fall, when the coronavirus and the flu virus are expected to be circulating simultaneously.