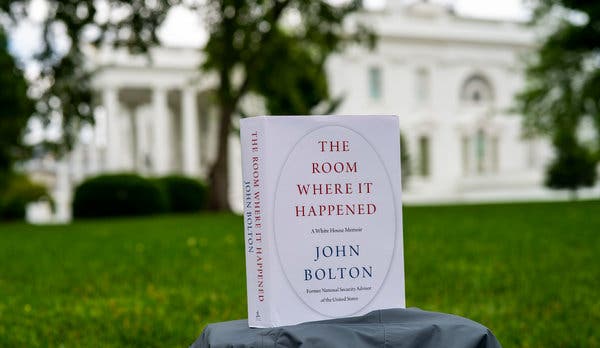 WASHINGTON — President Trump’s former national security adviser John R. Bolton can go forward with the publication of his memoir, a federal judge ruled on Saturday, rejecting the administration’s request for an order that he try to pull the book back and saying it was too late for such an order to succeed.
“With hundreds of thousands of copies around the globe — many in newsrooms — the damage is done. There is no restoring the status quo,” wrote Judge Royce C. Lamberth of the Federal District Court of the District of Columbia.
But in a 10-page opinion, Judge Lamberth also suggested that Mr. Bolton may be in jeopardy of forfeiting his $2 million advance, as the Justice Department has separately requested — and that he could be prosecuted for allowing the book to be published before receiving final notice that a prepublication review to scrub out classified information was complete.
“Bolton has gambled with the national security of the United States,” Judge Lamberth wrote. “He has exposed his country to harm and himself to civil (and potentially criminal) liability. But these facts do not control the motion before the court. The government has failed to establish that an injunction will prevent irreparable harm.”
The main elements of the book, “The Room Where It Happened,” an unflattering account of Mr. Trump’s conduct in office, have already been widely reported.
Mr. Trump has accused Mr. Bolton of lying — and false information is not classified. But he has also made clear that he wants the Justice Department to prosecute his former aide for spilling secrets, a position he reiterated on Saturday.
The president wrote on Twitter that Mr. Bolton “broke the law by releasing Classified Information (in massive amounts). He must pay a very big price for this, as others have before him. This should never to happen again!!!”
Still, Mr. Bolton won the first round by defeating the Justice Department’s request for an order that he try to prevent further dissemination of his book. The department had also claimed that such an order could bind his publisher, Simon & Schuster, and bookstores that already have copies. The book goes on sale next week.
In a statement, Charles J. Cooper, a lawyer for Mr. Bolton, praised Judge Lamberth’s decision but took exception to the judge’s strong suggestion that his client had violated his agreement or published classified information.
Judge Lamberth issued the ruling after holding a public hearing on Friday about the government’s request in which he had strongly signaled that he believed the Justice Department’s request for a temporary restraining order and preliminary injunction had come too late to ensure that any classified information in the book would remain secret.
Later on Friday, he held a closed-door hearing with government lawyers to discuss their contention that classified information remains in the manuscript — including an exceptionally restricted kind that could reveal closely held intelligence sources and methods — even though the National Security Council’s top official for prepublication review had told Mr. Bolton that she was satisfied with the edits he had made at her request.
After her review was complete, the White House never sent a final approval letter to Mr. Bolton, who told Simon & Schuster to publish anyway. But the White House, without telling Mr. Bolton, opened a second review by a National Security Council official, Michael T. Ellis, who claimed last week to have found at least six examples of classified information in the manuscript.
Mr. Ellis had not received training in prepublication review until after he analyzed Mr. Bolton’s manuscript. Mr. Cooper, a lawyer for Mr. Bolton, has accused the administration of politicizing the process as a pretext to prevent his client from revealing embarrassing facts about Mr. Trump.
But other national security officials have also said in declarations to the court that they think classified information is in the book.
Judge Lamberth will also oversee the part of the lawsuit that seeks to seize Mr. Bolton’s proceeds for writing the book as a penalty for purportedly breaching the agreements he signed as a condition of receiving classified information to go through the prepublication review process. Mr. Cooper has argued that Mr. Bolton lived up to them.
The judge wrote that after viewing classified declarations and discussing them in the closed hearing, he was “persuaded that defendant Bolton likely jeopardized national security by disclosing classified information in violation of his nondisclosure agreement obligations.”
Judge Lamberth wrote that if Mr. Bolton was dissatisfied with the delay, he could have sued the government instead of unilaterally publishing. He said Mr. Bolton had gambled and lost.
“This was Bolton’s bet: If he is right and the book does not contain classified information, he keeps the upside mentioned above; but if he is wrong, he stands to lose his profits from the book deal, exposes himself to criminal liability, and imperils national security,” he wrote. “Bolton was wrong.”

“We welcome today’s decision by the court denying the government’s attempt to suppress Ambassador Bolton’s book,” he said. “We respectfully take issue, however, with the court’s preliminary conclusion at this early stage of the case that Ambassador Bolton did not comply fully with his contractual prepublication obligation to the government, and the case will now proceed to development of the full record on that issue. The full story of these events has yet to be told — but it will be.”
The Justice Department’s request for an order that Mr. Bolton attempt to somehow pull back his book had raised broader constitutional alarms. The Supreme Court has ruled that the First Amendment only rarely permits the government to block people from printing information. Several news organizations, including The New York Times, were among outsiders who submitted briefs urging Judge Lamberth to reject the request.
But the court has upheld the constitutionality of the government using the prepublication review system to ensure that there is no classified information in writings by officials who had security clearances. The court has affirmed the government’s seizure of book advances and royalties from officials who publish books without going through that process.
The Knight First Amendment Institute at Columbia University has filed a lawsuit challenging that system on behalf of a group of former government officials, claiming that it is dysfunctional and puts too much discretionary power in the hands of reviewing officials who can abuse that authority to discriminate against politically disfavored authors.
In a statement, Jameel Jaffer, the executive director of the institute, praised Judge Lamberth’s rejection of the request for an injunction but criticized his positive discussion of the review system.
“The court was of course right to reject the government’s request for a prior restraint, especially because the injunction the government sought here was broader than the one the Supreme Court rejected in the Pentagon Papers case,” he said. “In other respects, though, the ruling is a troubling reaffirmation of broad government power to censor in the name of national security. The prepublication review system puts far too much power in the hands of government censors, and reform of this dysfunctional system is long overdue.”