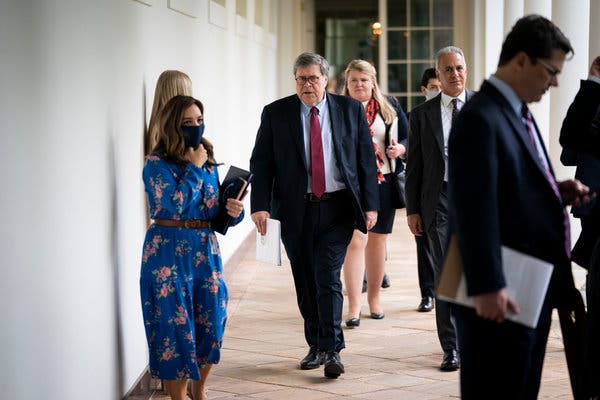 President Trump on Saturday fired the federal prosecutor whose office put his former personal lawyer in prison and is investigating his current one, heightening criticism that the president was carrying out an extraordinary purge to rid his administration of officials whose independence could be a threat to his re-election campaign.

Mr. Trump’s dismissal of the prosecutor, Geoffrey S. Berman, the United States attorney in Manhattan, whose office has pursued one case after another that have rankled Mr. Trump, led to political blowback and an unexpected result: By the end of the day, Mr. Berman’s handpicked deputy, not the administration’s favored replacement, was chosen to succeed him for now.

The abrupt ouster of Mr. Berman came as Mr. Trump sought to reinvigorate his campaign with its first public rally in months and days after new allegations by his former national security adviser that he had engaged in “obstruction of justice as a way of life.”

It was the latest move in a broader purge of administration officials that has intensified in the months since the Republican-led Senate acquitted Mr. Trump at an impeachment trial.

Since the beginning of the year, the president has fired or forced out inspectors general with independent oversight over executive branch agencies and other key figures from the trial.

Mr. Berman, who has been in office since 2018, had declined to leave his post after Attorney General William P. Barr announced late on Friday night that Mr. Berman would be replaced by Jay Clayton, the chairman of the Securities and Exchange Commission.

Mr. Clayton is friendly with Mr. Trump and had golfed with the president at his club in Bedminster, N.J., as recently as last weekend, according to two people familiar with the matter.

But on Saturday, facing a standoff with Mr. Berman, Mr. Barr shifted course. In a letter released by the Justice Department, Mr. Barr told Mr. Berman that Mr. Trump had fired him and that he would be replaced temporarily with the prosecutor’s own chief deputy, Audrey Strauss.

The choice of Ms. Strauss appeared to mollify Mr. Berman, who then issued a statement saying he would step down in light of the reversal.

In the statement, Mr. Berman said that under Ms. Strauss, the Southern District of New York, as the prosecutors’ office in Manhattan is formally known, “will continue to safeguard” its “enduring tradition of integrity and independence.”

The swirl of events on Saturday, which changed by the hour, was the culmination of longstanding tensions between the White House and Mr. Berman’s office, which in the past three years has brought a series of highly sensitive cases that have troubled and angered Mr. Trump and others in his inner circle.

First, there was the arrest and prosecution in 2018 of Michael D. Cohen, Mr. Trump’s longtime legal fixer. Then, there was the indictment last year of a state-owned bank in Turkey with political connections that had drawn the president’s attention. More recently, Mr. Berman began an inquiry into Rudolph W. Giuliani, Mr. Trump’s personal lawyer and one of his most ardent supporters.

Speaking briefly to reporters outside the White House before heading to a campaign rally in Tulsa, Okla., Mr. Trump tried to distance himself from the firing. He insisted he was “not involved” in the decision to remove Mr. Berman despite what Mr. Barr said in his letter.

Mr. Clayton had recently signaled to his friends and the president that he wanted to return to home in New York City and was interested in Mr. Berman’s job, according to people familiar with the matter. Mr. Barr had said New Jersey’s top federal prosecutor, Craig Carpenito, would hold the seat until the Senate could confirm Mr. Clayton.

By Saturday afternoon, the plan began to unravel, as the president and his senior aides scrambled to secure support for Mr. Clayton’s confirmation in the Senate, according to people familiar with the events.

The refusal of Republicans to defend Mr. Trump was palpable, and some people close to the president expressed concern that lawmakers in his own party would feel compelled to distance themselves from Mr. Trump’s decision.

The most prominent critic of the move was Senator Lindsey Graham, Republican of South Carolina and a close ally of the president’s.

Mr. Graham, chairman of the Senate Judiciary Committee, suggested in a statement that he would allow New York’s two Democratic senators to thwart the nomination through a procedural maneuver. He complimented Mr. Clayton but noted that he had not heard from the administration about formal plans to name him.

Given the number of sore spots between Mr. Trump’s Justice Department and the Southern District, its most prominent prosecutors’ office, it was not clear what prompted Mr. Trump and Mr. Barr to fire Mr. Berman.

At least two of the politically sensitive cases that the New York prosecutors have filed — those involving the Turkish bank and Mr. Giuliani — are continuing.

Throughout the day on Saturday, many current and former employees of the Southern District marveled at just how sour relations with their colleagues in Washington had gotten. Some worried openly that the move threatened the independence of federal prosecutors.

“While there have always been turf battles between the Southern District and the Justice Department in Washington, and occasionally sharp elbows, to take someone out suddenly while they’re investigating the president’s lawyer, it is just unprecedented in modern times,” said David Massey, a defense lawyer, who served as a Southern District prosecutor for nearly a decade.

The decision to remove Mr. Berman unfolded with particularly dizzying speed and seemed to take even several of the participants aback.

On Friday, Mr. Barr came to New York to meet with senior New York Police Department officials and, after nearly a month of public protests, to talk with them about “policing issues that have been at the forefront of national conversation and debate,” according to a Justice Department news release.

When he later met with Mr. Berman, according to two people familiar with the conversation, Mr. Barr suggested that Mr. Berman could take over the civil division of the Justice Department or become chairman of the S.E.C. if he agreed to leave his position in Manhattan.

“I have not resigned, and have no intention of resigning, my position,” Mr. Berman’s statement said. He added that he had learned of Mr. Barr’s actions only from the news release.

On Saturday, the pressure reached a breaking point. Mr. Barr told Mr. Berman in his letter that he had persuaded Mr. Trump to fire Mr. Berman because he had chosen “public spectacle over public service” by not voluntarily quitting the day before.

“Because you have declared that you have no intention of resigning, I have asked the president to remove you as of today, and he has done so,” the letter read.

In one sign that Mr. Barr’s move to oust Mr. Berman may have been hastily arranged, even Mr. Clayton, the man who had been poised to take Mr. Berman’s place, appeared to be caught off guard.

Mr. Clayton had sent an email to his staff on Thursday saying that he looked forward to seeing them in person, once work-at-home restrictions that had been put in place because of the coronavirus could be lifted. The email offered no indication that Mr. Clayton was planning to leave the S.E.C., according to a person briefed on it.

Just after midnight on Saturday, Mr. Clayton sent another email to his employees, telling them about his new position. “Pending confirmation,” he wrote, “I will remain fully committed to the work of the commission and the supportive community we have built,” according to a copy reviewed by The New York Times.


On Saturday, Representative Jerrold Nadler, a New York Democrat who heads the House Judiciary Committee, said the committee would investigate the firing of Mr. Berman as part of a larger inquiry into what he said was undue political interference at the Justice Department.

Under Mr. Trump, the Justice Department has long believed that the Southern District was out of control. In no small part that was because the department believed that prosecutors in New York delayed in warning them that they were naming Mr. Trump — as “Individual-1” — in court documents in the Cohen prosecution.

When Mr. Barr became attorney general, officials in the deputy attorney general’s office, which oversees regional prosecutors, asked him to rein in Mr. Berman, who they believed was exacerbating the Southern District’s propensity for autonomy. The office has embraced its nickname the “Sovereign District” of New York because of its tradition of independence.

One particular point of contention was the question of how Mr. Berman and his staff should investigate Halkbank, a Turkish state-owned bank that the office indicted last year, according to three people familiar with the investigation.

In a new book, John Bolton, Mr. Trump’s former national security adviser, wrote that Mr. Trump had promised the Turkish president, Recep Tayyip Erdogan, in 2018 that he would intervene in the investigation of the bank, which had been accused of violating sanctions against Iran.

Then there was the inquiry into Mr. Giuliani, which has focused on whether he violated laws on lobbying for foreign entities in his efforts to dig up dirt in Ukraine on the president’s political rivals. That investigation began after Mr. Berman’s office brought indictments against two of Mr. Giuliani’s close associates.

Mr. Trump has told advisers he was pleased with the move to dismiss Mr. Berman, and a person close to the president described it as a long time coming.

Mr. Trump has been dissatisfied with Mr. Berman, despite choosing him for the post himself, going back to 2018. That year, he told the acting attorney general at the time, Matthew G. Whitaker, that he was frustrated that Mr. Berman had been recused from the case against Mr. Cohen and wanted him to somehow undo it.

A Republican who contributed to the president’s campaign and worked at the same law firm as Mr. Giuliani, Mr. Berman had suggested that the Justice Department cannot fire him because of the way he came into his job.

In 2018, the attorney general at the time, Jeff Sessions, appointed Mr. Berman as interim United States attorney in Manhattan. But Mr. Trump never formally sent Mr. Berman’s nomination to the Senate, as is normal protocol. After 120 days, Mr. Berman’s official appointment to the post was made by the judges of the United States District Court.

Mr. Berman suggested that only those judges could dismiss him from his position, although that was far from a settled legal matter. A 1979 Justice Department memo holds the position that the president could fire a prosecutor in Mr. Berman’s position.

Who Can Fire a Court-Appointed U.S. Attorney? An Abrupt Legal Fight, ExplainedJune 20, 2020
Last year, Mr. Barr considered replacing Mr. Berman with Edward O’Callaghan, a top Justice Department official and a former Southern District prosecutor, according to people familiar with the matter. The plan fell through, however, in part because of the complex legal issues around how Mr. Berman was appointed.

Ms. Strauss, who currently serves as Mr. Berman’s deputy, was one of his early hires after he became U.S. attorney in 2018. She had previously worked in the office as a rank-and-file prosecutor and later spent many years as a lawyer in private practice.

As deputy, Ms. Strauss had also assumed responsibility for several of the prominent investigations from which Mr. Berman had recused himself. Among them was the prosecution of Mr. Cohen.